This Thursday at 6 pm you can attend interviews of all 17, or whichever of those present themselves. Here’s the list of names. Some highlights:

Full disclosure: one of these folks is my neighbor but I didn’t realize that at first. Anyway, the info above is all from their applications (yes, I read them all) and any available public profiles.

Reading through the applications I am struck by the amount of talent and commitment to service we have to choose from. Also by the fact that the entire Planning Commission seems to be applying. Thanks to everyone who applied for being willing to spend time on the City Council, it’s an important role.

After the interviews, the City Council must by majority vote choose one applicant. That will happen on January 18th.

And the corner at 40th and Island Crest Way is busy:

So vote if you haven’t! Here’s our Election 2010 Crib Sheet for State Senator and then for Senator and US Representative. 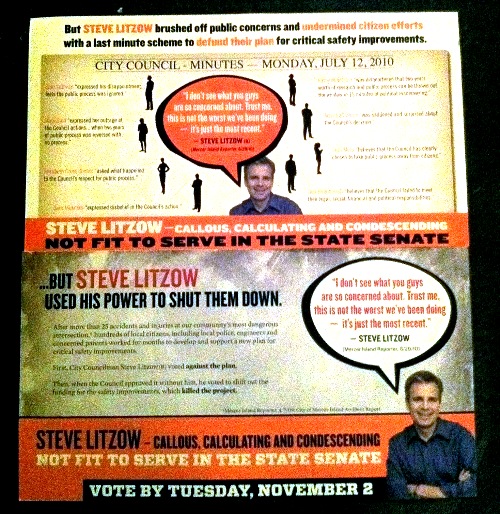 I want to come out on Steve’s side but I have to say I agree with the fliers that keep showing up in my mail. Steve was instrumental in shelving the heavily-studied, citizen-approved and already-funded road diet plan.I hate to be a single-issue voter but, as it turns out, I am on this one.

Fiscal responsibility is important. But public safety is more important. We can afford to reconfigure Island Crest Way and we should do it.

If you want background on other issues, check out Publicola’s endorsement of Randy Gordon. I agree with them on several of the issues. But mostly I disagree with Steve on Island Crest Way.

It’s Campaign Season and Litzow’s on the Corner

Don’t worry, the light was red when I took this photo.

On the Ballot this Fall

Continuing our crib sheet on the election, here’s what new since the primaries.

Rossi has seemed a bit disingenuous lately. He called Murray out on pork but as a State Senator was very fond  of “locally targeted investments.” Hmmm…  And is getting $3 million from undisclosed donors for attack ads but would vote against the DISCLOSE act on campaign finance.

It’s the  go-go years of campaign finance, with heavily funded groups pouring money into elections all over the country. Why let them be secret?

Anyway, if you want to learn more, the Seattle Times recorded an interview with the two candidates. 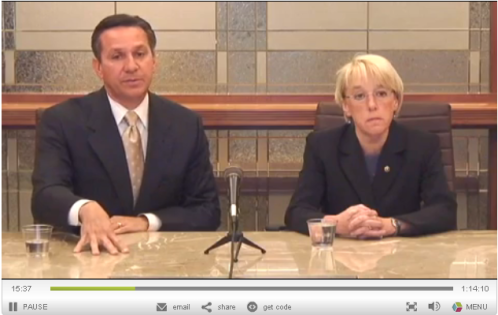 The most local election on the ballot this fall is for Representative, US Congressional District 8 between Dave Reichart and Suzan DelBene.  The Seattle Times endorsed DelBene, calling her “a smart moderate.”

A Bunch of Initiatives

Re: the debate over the Washington State income tax, I’ve been split on it. I’m not against an income tax forever in Washington but I do think a proposal that puts such a broad tax on some and not others is not in the spirit of the republic. The wealthy should pay more but they should not pay alone. And no, my family wouldn’t qualify for the tax if it were passed.

As for the rest of all those initiatives, you’re on your own. I’ll just remind you that Tim Eyeman is crazy.

If you’re like me and waited until election night to do your civic homework, here’s a crib sheet for tomorrow’s Primary and Special Election.

Publicola has a good editorial on this one. Dave Reichart, the incumbent, is unfortunately just acting as part of the Republican Block Voting Machine. Suzan Delbene, on the other hand, is a successful entrepreneur who knows how to grow business (which I hope means fiscal sense) and has a liberal social agenda.

I admit it, I haven’t done my homework on the other races. But if you want to, here are three good places to start:

Mail those ballots by end of day!

City Council: The Issue IS Safety

No, really, Did the City Council just kill the Island Crest Way road diet project? You’ve got to be kidding me. The Reporter covered the meeting; I’ll let you read the sad details.

“Safety is not the priority for Island Crest Way [changes]. The issue for safety is crossing.” said Steve Litzow, Councilman.

Steve, I live a few blocks off ICW, and I agree with your fellow Councilman Bruce Bassett: the issue IS safety. There was another accident at Merrimount just a couple of Saturdays ago. And have you ever tried crossing the street? I hope you can sprint.

Putting a couple of lights on the street is a band-aid. It doesn’t fix the problem.

“The irony of this is that this project probably had one of the largest public processes that I’ve seen in 30 years.” Elliot Newman, former Mercer Island mayor.  And widespread public support.

Not only that, but our election in November was basically a referendum on the issue, with only one of three City Council seats contested in a race where Ira Appleman made abandoning the road diet his single-issue platform. Ira lost. Islanders support and want to road diet. To have funded stripped in a single City Council meeting with no public discussion and no cost/benefit analysis of the options is a disgrace.

All quotes in this article are from the Mercer Island Reporter coverage.

Publicola reports that the GOP is focused on fundraising for East Side elections, including for the 41st district of which we’re a part.

“In the 41st (Mercer Island, New Castle, Issaquah, Renton) where liberal Democratic incumbent Randy Gordon is facing off against moderate NARAL-endorsed Stephen Litzow, it’s basically a dead heat in fundraising (which is actually good news for Gordon, who was previously far behind, but boasted to us that his funding was picking up. Litzow has raised slightly more overall, $44,000 to Gordon’s $42,000, but looking at cash on hand—Gordon is ahead by about $10,000—$31,000 to $22,0000.”

And in less mainstream political news, an organization called ResistNet is holding a rally in downtown Mercer Island on July 4th. Purpose: take back our nation, according to the website.

November will be interesting on both the national and the local level.

Breaking Away from Cycling Ordinance

The Mercer Island City Council wisely broke away from an ordinance that would have required bikers in groups of 2 or more to pull over for cars. The MI Reporter is right on the wheel of the story, giving a stroke by stroke account of the meeting.

From the P-I Velocity blog.

Cyclists drafted a variety of protests at the meeting. Skinny people in spandex may not look too tough but they can get cranky (especially when they haven’t eaten an hour into a long ride). Mercer Island is one of the premier cycling destinations in the area for our winding, hilly and stoplight-free route from East Mercer to West Mercer to bike path. Team Luna rides it for training, commuters cross the Island to link the East Side and Seattle, and there’s even a Waffle Ride.

These aren’t really attacks, but I’ve got a metaphor to maintain.

It’s great to keep East and West Mercer bike friendly. Many Islanders are cyclists or commuters, and I for one  don’t mind most of our  spandex-coated visitors (though as a former competitive cyclist myself, and a bike commuter, I’m the first one to say that some cyclists have an attitude that is totally unwarranted.)

And by the way, May is Bike to Work month. Here’s a photo from last year’s:

Thanks again to Joshua Putnam and his great bike photos on Flickr.

“The Most Important Election You’ve Never Heard of”

Is what Publicola is calling Tuesday’s vote on the King Conservation District. According to the Seattle Times, “Last year, 2,757 people voted — fewer than one-third of 1 percent of eligible voters. That was a lot better than in 2008, when 198 people voted, or 1988, when 14 voters showed up.”

Take it away, Publicola:

“The most important election you’ve never heard of, for a seat on the five-member King Conservation District board, is happening next Tuesday, March 16, at seven libraries around King County. The district gives out conservation grants and oversees land use in rural King County; the decisions it makes determine whether wetlands and habitat are protected or developed into suburban sprawl.”

You can read on for thier endorsements. Election info is on the KCCD website, but the short story is that you need to stop by one of seven libraries on Tuesday to vote. Closest to Mercer Island are the Seattle Central Library downtown and the Bellevue branch at 1111 110th Avenue NE. Polling hours are 10:30 am to 7:30 and 8 pm, respectively.

And for a story of back-room drama in this election two years ago, check out Blogging Georgetown.

Worth a stop at the library if you can make it.

Max Prinsen, the Sierra Club favorite, won the election. And 4,232 people voted– almost twice as many as last year.