Several folks on the Island deserve them.

First, to the Mercer Island Schools Foundation and the PTA for raising $850,000. This more than makes up for the loss of funding by the state. Nice work bridging the gap!

Second, to Mercer Island Quarterback Jeff Lindquist who was named to the “Super 7” list, which means he gets to go to Hawaii and play with some Hall of Famers.

And to Kela Harrington of Islander Middle School, who made it to the 3rd round of the Scripps National Spelling Bee, which means she can probably spell inchoate and ersatz.

And finally, to the VFW Keewaydin Clubhouse, which got a $5,000 grant for preservation from Americans Express and the National Trust for Historic Preservation. Go get that new roof!

There are two seats up for election on Nov. 3 for the Mercer Island School Board. Adair Dingle is running unopposed for one; the other is contested by Terri Caditz and Dave Myerson.

Caditz, Myerson, and an artifact of the responsibility they seek. “For Rent” is just a sign of the times.

These two are not short on credentials. They have five degrees between the two of them. They also both endorse the MISD’s 2020 Vision.

Now onto the differences:

No endorsement here, just trying to figure out what these two are about. Though I’d be interested to read comments from anyone who’s been involved in the MISD or PTA over the last few years. Just type in the form below…

Before we get into the Assessor’s race, an update on the most contested race on the Island this election year: the race for City Council Position #2. No fewer than 6 former Mercer Island mayors (including Fred “loved by all” Jarrett) sent a letter endorsing Grausz as a good guy on the Council and Ira as a rabble-rouser who uses scare tactics.

Meanwhile, Ira has expanded his single-issue “No Road Diet” campaign to include opposition to any tolling on I-90. And he sent a letter too.

And Now, Assessing the Assessor

The King County Assessor race probably falls into the less interesting of the ballot items this November, but it’s important to homeowners. The Assessor is the one whose office tells you how much your property is worth in the eyes of the county and therefore, how much you’ll pay in taxes. This is an off-schedule election due to recent turmoil in the Assessor’s office.

I’ve narrowed down the candidates based on the Seattle Municipal League’s ratings because, frankly, it’s Sunday night and I’m tired. So here are the 3 rated “Good” or “Very Good” by the League:

All have some kind of fairness or current value language in their platforms, referring to assessing real values instead of the real estate peak. Rosenberger also talks about “reducing exemptions” that shift the burden to normal taxpayers. Based on the candidates’ statements and their experience, I’ll vote for Rosenberger though Lloyd Hara would probably be a good Assessor as well.

Aside: What the Assessor’s Taxes Pay For

The Assessor’s race is also important to anyone with kids in the local schools, because it was a fall in tax revenues that caused $2.4 million in cuts to Mercer Island schools this year. The Mercer Island Schools Foundation helped to partly address with $1 million in fundraising, about half of which went directly to saving 5.4 teaching positions. The organization doing a phone-a-thon Oct. 26th and 27th, so expect to hear from them.

Budgets are being cut deeply all around Puget Sound as the state deals with a $9 billion budget shortfall. Education hasn’t been spared, from the UW to massive layoffs at school districts like Seattle and Bellevue.

We just got the latest update from the Mercer Island School District in the mail, which warned of similar bone-exposing cuts. The MISD estimated that about $2.4 million was cut from its 2009/2010 budget. According to the June flier, this means:

Pretty bad news for any school district. Extremely disheartening in a district where people typically pay higher home prices for a good school district. But a couple of saves have softened the blow:

First, the Reporter says up to 5 positions will be saved by the money raised by the Mercer Island Schools Foundation breakfast. When Ken Glass alerted us to this event back in February, I thought it would be pancake-focused affair. Little did I know it would end up plugging a giant hole in the schools budget- $430,000 of the hole, to be exact. Nice work Ken and others from the MISF!

And with a little help from the federal stimulus, another $400k gets saved in this school year. So after the saves, the budget reduction is about $1.6 million, which isn’t great but sure is better than $2.4 million.

There will still be budget reductions. Professional development for faculty and staff, music programs, and certain clubs and after-school activities will be hit. Which leads us to the next save…

Last winter, the economic recession and a resulting decline in revenues threatened to end our legacy as the theater came very close to the brink of closure. In response, the theater launched a “Save YTN” campaign and the immediate support of many emergency donors kept our theater doors open through spring. After a momentous vote in the chambers of Mercer Island City Hall, our legacy has been secured for the future. On Monday, June 15, the City Council approved a historic allocation of $37,000 to the Theatre’s Emergency Appeal. This is not only a cause for celebration among our young students and their families, but a victory for the entire community.

With that vote and contribution, Youth Theater Northwest’s Emergency Appeal is over. And now if the theater program gets cut by the MISD along with music,  those kids can head across town and still get the chance for all that exploration and enrichment that happen after normal class hours.

When people ask me why I like Mercer Island, before I talk about the schools, or quiet, or the fast commute (or Bennett’s, the best-kept secret on Mercer Island), I tell them about the community. Not to get too mushy, but I’m a bit knocked over by the neighborliness and willingness to jump in and help out in this town. Recession sucks. But recession with good neighbors sucks less.

Congratulations to Jean Laschever, who just won a Fulbright grant. She’s graduating from Pacific University in Oregon this year and plans to go to India to study HIV and AIDS.

Jean spent four years at MIHS and didn’t waste much time. She won twelve varsity letters which only four students have done since 2000, according to the MI Reporter. That means she has to play a varsity sport every season for each of her four years. One of those sports was wrestling, and back in ’04 the Seattle Times wrote that Jean won a critical match to help MI beat Liberty and go on to the conference championship.

She obviously distinguished herself academically as well at Pacific to win the Fullbright. Good luck in India Jean and congratulations!

There’s something in those Mercer Island house prices: school test scores. I came across this data on the Federal Education Budget Project site by the New America Foundation. They give you data in tabular form, so I used Tableau to create some interesting visualizations of Puget Sound school districts:

The NCLB scores are defined “according to state-defined proficiency standards,” which makes me think they’re WASL scores. One can absolutely question the WASL as a measurement of student success, but for comparing district by district it should be fine since students throughout the state take the same test every year.

So that first visualization shows that yes, Mercer Island Schools are at the top of area schools in terms of test scores. Now let’s look at some factors that go into test scores: poverty and funding. 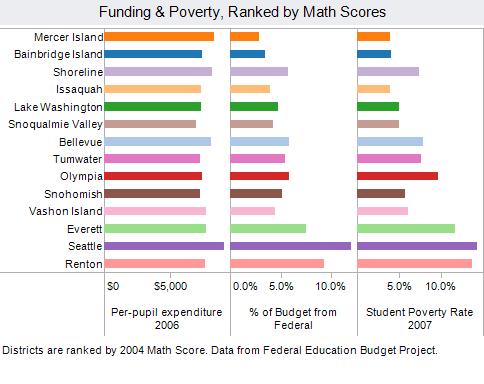 Mercer Island has the highest math scores, but also one of the largest per-pupil expenditures at $8,357 (Seattle is the only district with a higher per-pupil figure, at ($9140). Mercer Island gets less of its budget from the federal government than any other district, at 2.9% (the average is 5.7%). And out student poverty rate is lower than all but Issaquah.

This data doesn’t do much more than reinforce the well-known link between affluence and school performance. Higher poverty rates make schools’ jobs more difficult. Federal funding helps, but doesn’t fill all the gaps. We’re lucky to live in Mercer Island but we’re part of a larger region as well, and not all kids in the region are getting the same public education.